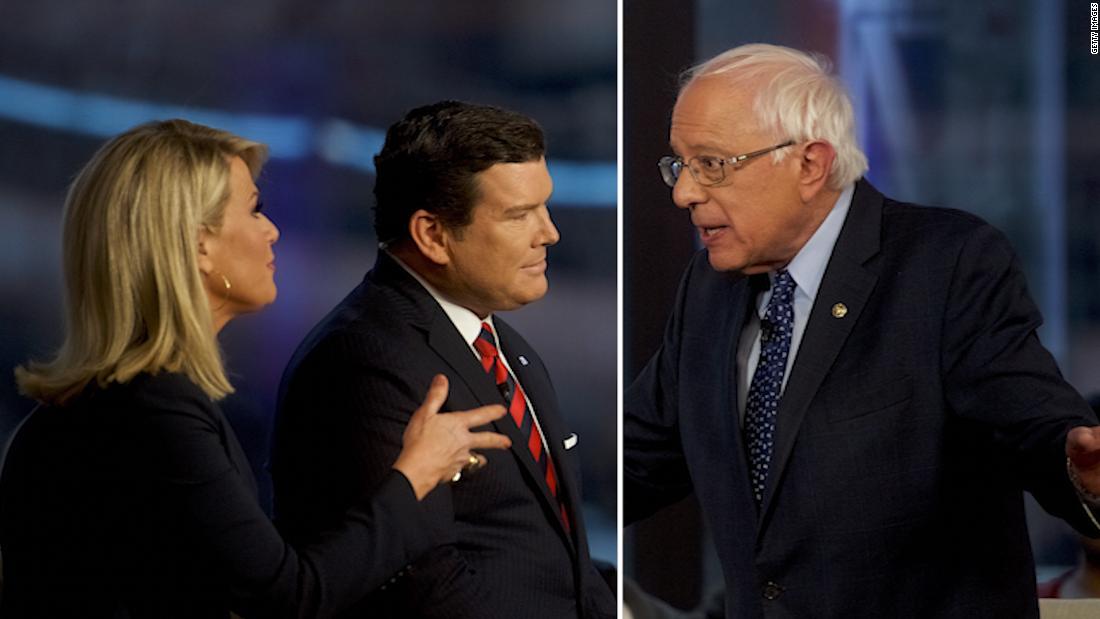 New York (CNN Business)A version of this article first appeared in the “Reliable Sources” newsletter. You can sign up for free right here.

Notice the “we?” Journalists were quick to point that Trump was suggesting that he and Fox are the same entity. Talk about a Freudian slip…

The Fox anchor tweeted: “Thanks for watching Mr. President — we’d love to have you on a town hall soon — or even an interview on @SpecialReport —it’s been awhile. We cover all sides.”
As Politico Playbook noted, Baier has been seeking an interview with Trump for years… The president’s interviews on Fox are “almost always with friendly commentators like Sean Hannity or Jeanine Pirro.”
Trump’s criticism continued on Tuesday night: He claimed that “many Trump fans & signs” were outside the town hall, and there were “big complaints about not being let in — stuffed with Bernie supporters. What’s with @FoxNews?”
According to the local paper, however, “Fox reached out to various political and local groups in the area and mined requests to attend after it publicly announced the event.” Trump supporters were in the audience.
All of this just shows how Fox’s viewer-in-chief reacts — angrily — when the network makes space for critical voices.
Meanwhile, WaPo’s Philip Bump wrote about how “fleeting” the Sanders moment was — Sean Hannity and many, many others criticized Sanders after the town hall ended…

Other Dems are open to Fox

As The Daily Beast’s Scott Bixby wrote, “Sanders’ successful appearance last night may have cracked the wall in candidates’ opposition to appearances on the network.”
Fox is certainly pointing to the ratings to persuade other 2020 contenders. Bernie drew 2.55 million total viewers, making it the “top-rated such event in the 2020 election so far,” Mediaite wrote. For comparisons’ sake, the same time slot averaged 1.88 million viewers the previous Monday.
So, with all that in mind, Pete Buttgieg might be the next Dem to participate. On Tuesday, his campaign confirmed that it is in talks with Fox about a town hall. Oliver Darcy has the details here. Campaign spokesperson Lis Smith said last month on “Reliable” that the South Bend mayor’s media strategy is “talking to everyone…”
→ Per the Beast’s Gideon Resnick, three other candidates — Eric Swalwell, Tim Ryan, and Julián Castro — are also interested in the Fox town hall format…
→ CNN’s next town hall event has five candidates back to back next Monday night…

Brian Lowry writes: In the last few days both Bill Hemmer and Bret Baier have chafed at on-air criticism of Fox News from Tom Perez and Bernie Sanders, respectively. But it’s self-serving at best — and a little disingenuous — for those anchors to downplay the concerns expressed about Fox News as an organization or its primetime hosts. If Fox is serious about hosting Democrats through the election cycle, its anchors are going to have be a bit less snowflake-y about such criticism…

James Murdoch is doing WHAT!?

“What’s Next for James Murdoch?” THR asked on Monday. The story had lots of answers… And even more came out on Tuesday. With his brother Lachlan Murdoch running FOX, James is doing his own thing…
The WSJ’s Ben Mullin wrote Tuesday about Murdoch’s plans to invest in a comic book publisher called Artists, Writers and Artisans. “The value of storytelling is only going up, and AWA is uniquely positioned to create a tremendous platform for writers and artists,” Murdoch said.
Then, later in the day, a team at the FT dangled this info: Murdoch’s “new portfolio” of media companies “could include a liberal-leaning news outlet.”The paper, citing “people with direct knowledge of his plans,” said Murdoch “wanted to distance himself from the conservative media outlets controlled for decades by his father but had yet to decide how exactly he would invest in the news media. His options range from a liberal news website to a digital magazine focused on culture, society and lifestyle.”

Murdochland was quiet when the NYT published its three-part investigation of “Planet Fox” two weeks ago. But one of Rupert’s top execs, News Corp CEORobert Thomson, has something to say. In a Tuesday evening speech, he “dismissed the NYT’s investigation as a ‘rancid hatchet job’ that was ‘distant from the truth,'” according to the Sydney Morning Herald.
Thomson called it “multi-generational muck-spreading in which the facts were incidental, if not accidental, and the journalistic jaundice and corporate self-interest were fundamental.” Hmmm, which facts? I don’t see any corrections on the story!

Notre Dame, the day after

Wednesday’s cover of Libération shows the charred inside of the cathedral. Despite all the damage, the fire is out; “it’s amazing that so much was spared;” and “all of Paris is united in the effort to rebuild,” Chris Cuomo said on “Prime Time.” A few notes:
— “The most egregious examples of misinformation” about the fire — attempting to blame “racial or religious minorities for the outbreak” — originated “in the darker corners of the internet, but many found bigger audiences on social media,” CNN’s Gianluca Mezzofiore wrote Tuesday…
— Charlie Warzel made this point about the crazy conspiracy theories: “The first rule of this internet hellscape is that everything is mined in support of the broader narrative. Doesn’t really matter what’s happening…it’s all just ammunition for the info war.”
— Donie O’Sullivan’s latest: YouTube’s algorithmic suggestion that the fire was linked to the 9/11 attacks shows, once again, that tech companies have a major “live” problem…
— Per Taylor Nicole Rogers, “Victor Hugo’s ‘The Hunchback of Notre-Dame’ has become the best-selling book on Amazon France…”

This week is one awfully long “stand by for news” until the redacted Robert Mueller report is released on Thursday morning… All the major TV networks have made plans for special coverage…
— Here is Joe Pompeo’s look at journalists handicapping “Mueller’s moment of truth…” (VF)
— Kevin Liptak and Kaitlan Collins’ latest: “Trump anticipates Mueller’s vindication but aides fret about his temper…” (CNN)

A credible threat was lodged against Columbine High School and other schools in the area on Tuesday, days ahead of the 20-year anniversary of the Columbine school shooting. It is yet another demonstration of how the country has changed since then.
On Wednesday, CNN’s Brooke Baldwin will be sharing a special segment that brings survivors from Columbine and Parkland together.
Wayne Drash is authoring the companion story for CNN.com — a continuation of “The Loneliest Club.” Baldwin told me: “The idea was to have bookends of two terrible tragedies in our nation’s history. What have we learned, what’s changed.”

— Twitter chief Jack Dorsey’s “mea culpa tour” continued at TED 2019…Emily Dreyfuss has an excellent recap of his vague comments here… (WIRED)
— Dreyfuss tweeted later: “It’s hard for me to express how frustrating it was to watch @Jack’s talk at TED today. I was frustrated, the audience was frustrated, he was frustrated, the people he was talking to were frustrated. It was a whole frustrating thing!” (Twitter)
— Read more of Tuesday’s “Reliable Sources” newsletter… And subscribe here to receive future editions in your inbox…
— Via Claire Atkinson: “After decades of HBO sponsorship, looks like Netflix is taking over Bryant Park movie night.” With HBO moving from Bryant Park to Hudson Yards, this makes sense… (Twitter)